Will you be the Best Woman Pirate of the High Seas?

Will you be the Best Woman Pirate of the High Seas?

Welcome to Pirate Party: Women of the High Seas 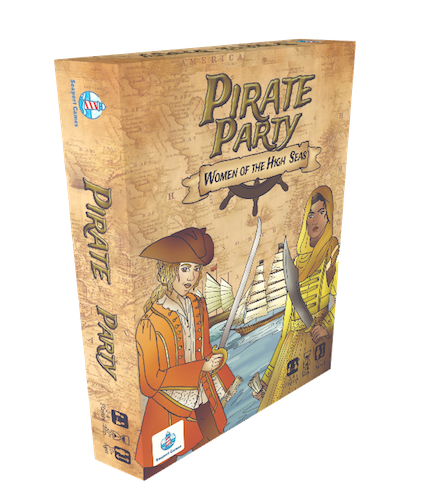 Travel the High Seas making a reputation for yourself, as the fiercest woman pirate!

Play sets to earn the most pirate points.

Pirate Party: Women of the High Seas is a card game that is made up of 65 cards. The cards breakdown is as follows:

Each card has their name on the top middle on a banner, the points they are worth on the top left, and on the top right the suit (if any). Each Captain has their own special ability.

During your turn, you will do 2 things: Play cards and then draw one card. When you play cards, you can do it in various ways:

In the run above: I used the Pillage card to steal the Mermaid from another player and it acts as a wild. I chose to use it as Captain Pirate Sayyida Al Hurra, since I didnâ€™t have a Captain for my yellow scimitars. This run scored 70 points and an additional 10 points for the Pillage Card.

The moment I saw Pirate Party: Women of the High Seas, I was intrigued, a game that focuses on diverse real women pirates, and they are not oversexualized. In the rulebook, there are little blurbs of each of the Captains. I would have loved to see non-binary pirates in this game as well, even if they werenâ€™t actual historical figures.

I feel like in a 2-player game the Take That might be too  much. In my opinion the  more players you have, the more this game shines! You can also take out the Adventure cards out of the deck, if you want a less confrontational game and ignore the special ability of the Captains. This is a fun quick game that has a twist on your typical pirate theme

Pirate Party: Women of the High Seas has fully funded on Kickstarter!!