The Mad King has demanded a new castle! You are a renowned builder and you have been tasked to build the most grandeur castle for the Mad King. A project of this level of prestige requires more than one builder. Would you be able to coordinate with your partner to build the most magnificent and impressive castle?

Welcome to Between Two Castles of Mad King Ludwig

Between Two Castles of Mad King Ludwig is a tile laying game, in which you are working with the players to your left and right to build 2 castles. Once each tile is placed in your castles, it counts as one room in the castle. The game is played in 2 round; in each round you will have 4 turns to place 1 tile in each of your castlesÂ 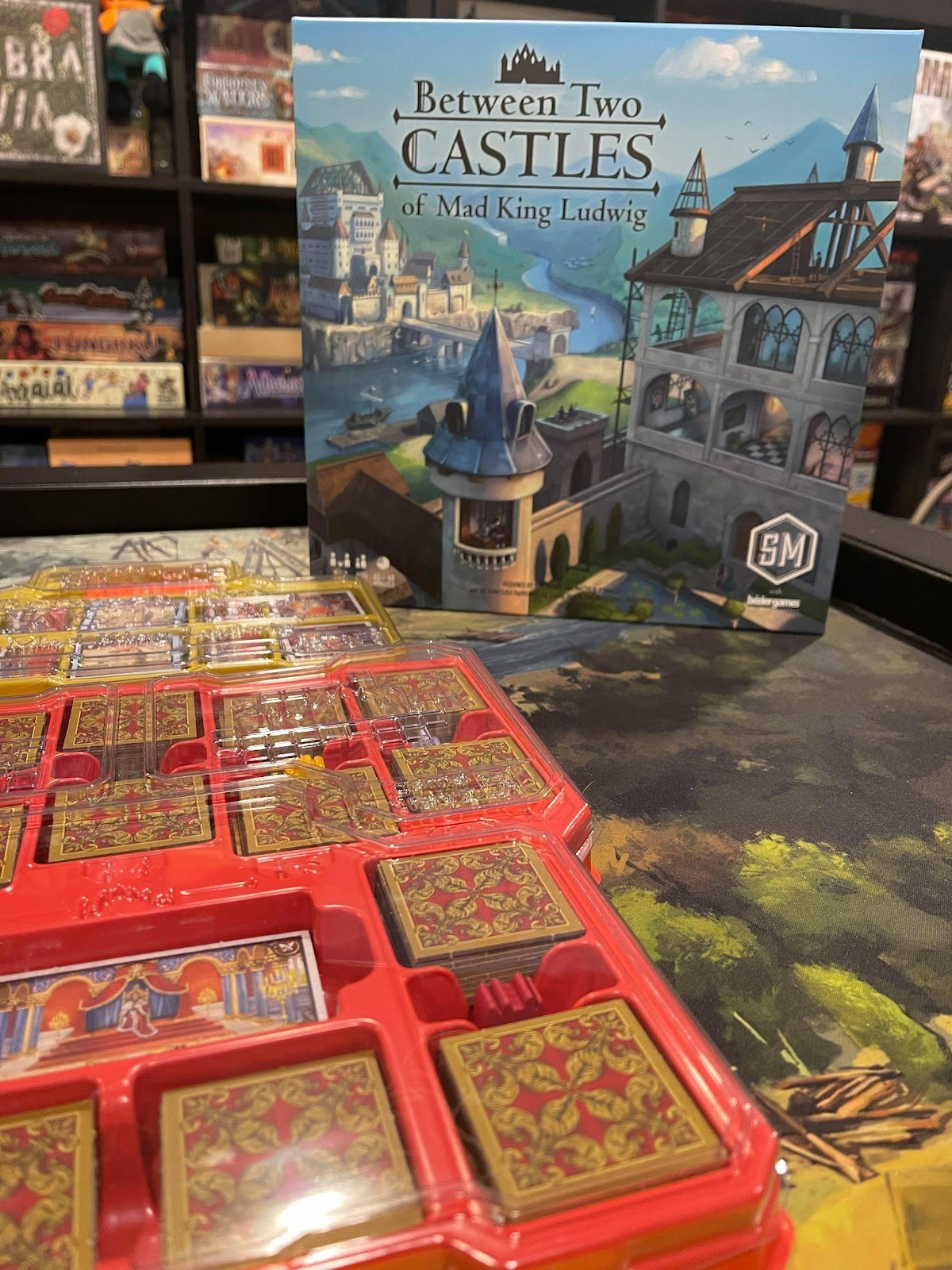 The game comes with 158 tiles â€“ 147 regular room tiles, which you will be using when drafting and building your castles. 48 specialty tiles, which can be earned through placement bonus. The art on the tiles is beautiful, they fit a great amount of detail on them. You wouldnâ€™t expect to have that much detail on tiles that size. Each regular room tile has different art.Â  The tiles do have some iconography on them that explains how they score at the end of the game. They are rather small in the sense that you wont be able to see what other players have in their castles. The tiles come in these amazing trays that keeps everything organized and tied. Once you are done playing, you can shuffle the tiles then store them and they will be ready for the next game. They tray is even set up, so each compartment is label with a player 1 and holds 9 tiles, exactly the amount you need for each round of the game.Â 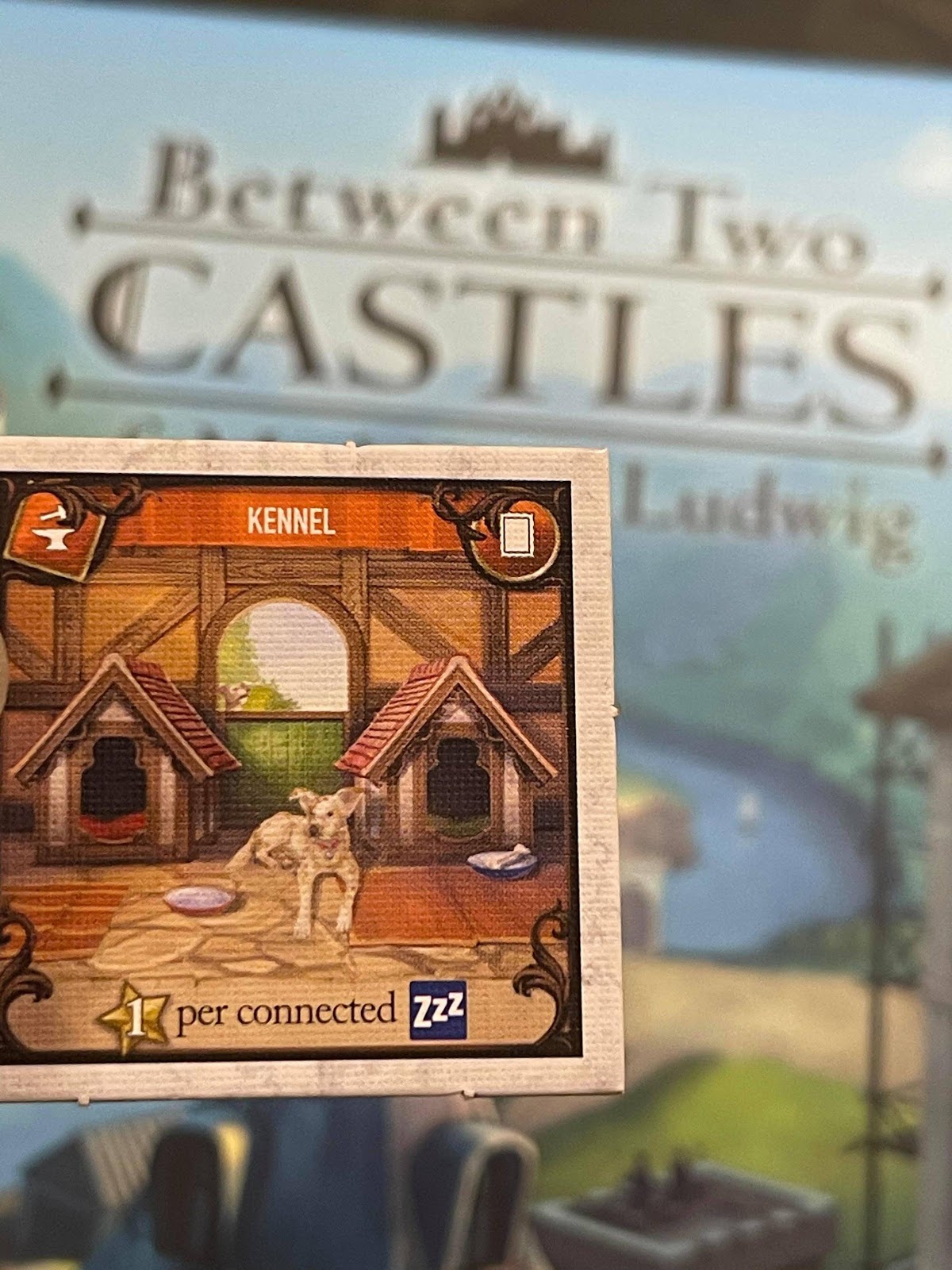 The game is played in 2 round; in each round you will have 4 turns to place 1 tile in each of your castles. You win the game by scoring your lowest scored castle while working with your neighbors.Â  Drafting the right type of tiles and determine the most optimal place for them. You have to find a balance between both of your castles.Â

You start each round with 9 tiles; you secretly select one for each of your castles (without discussing it with your partners). Then you pass the remaining tiles to the player to the left, if it is the first round, or to your right, if it is the second turn.Â  Once everyone is done selecting, you all simultaneously reveal your tiles and then openly discuss with you partners how to place them or who will place them first. Finally if there is only one tile left, discard it face down and it triggers the beginning of round two.Â

Once you are done with the second round you get to score your castles.Â

We played the 2-player variant, where you set up the game a 3-player game and the third player is â€œLudwigâ€. You build a castle with you partner and one with â€œLudwigâ€, which is means you are building one castle independently. All players get the 9 tiles, including â€œLudwigâ€. You select your two tiles, just like you normally would and if it is the first round, the player to the left of â€œLudwigâ€ shuffles his tiles and randomly selects two; if it is the second round the player to the right of â€œLudwigâ€ selects the tiles. The rest of the gameplay remains the same. We werenâ€™t thrilled with the 2-player variant, it felt like you could purposely tank the castle being built with the other player and just focus on your castle with â€œLudwigâ€.Â

We werenâ€™t thrilled with the 2-player variant. We werenâ€™t crazy about an imaginary player winning, when we actually worked on the castle. It just felt kind of blah to us. We tried playing where Ludwig doesnâ€™t win, and that didnâ€™t feel better for us.Â

We understand that this game was not truly designed to be played with such a lower player count. However, we are not discarding it because that variant was not a hit for us. This is a good lighter weight game for bigger crowds and that is ok. Even if you mostly focus on 2 player games, Between Two Castles of Mad King Ludwig is a good game to have in your library.Â

The expansion Between Two Castles: Secrets & Soirees expansion just released and we are dying to see what it adds to the game!