Quest and Cannons: The Risen Islands

Quest and Cannons: The Risen Islands

Unexplainably, one faithful day mysterious islands slowly rose from the depth of the oceans.  They simply mystified the travelers of Miraheim. Strange things began happening in the surrounding lands. In the Dwunnies lands, their Guardian Tree, that ensures a plentiful harvest, has suddenly become ill. In the Delven lands, the waterfalls, that provide fresh water in the basin, dried up. In the Porc lands, the food source of the caravan herds that carry their homes, is no longer available.  All these misfortunes have force many of the travelers of Miraheim to take to the sea in search of resource, quests, and clues.

Welcome to Quest and Cannons: The Risen Islands 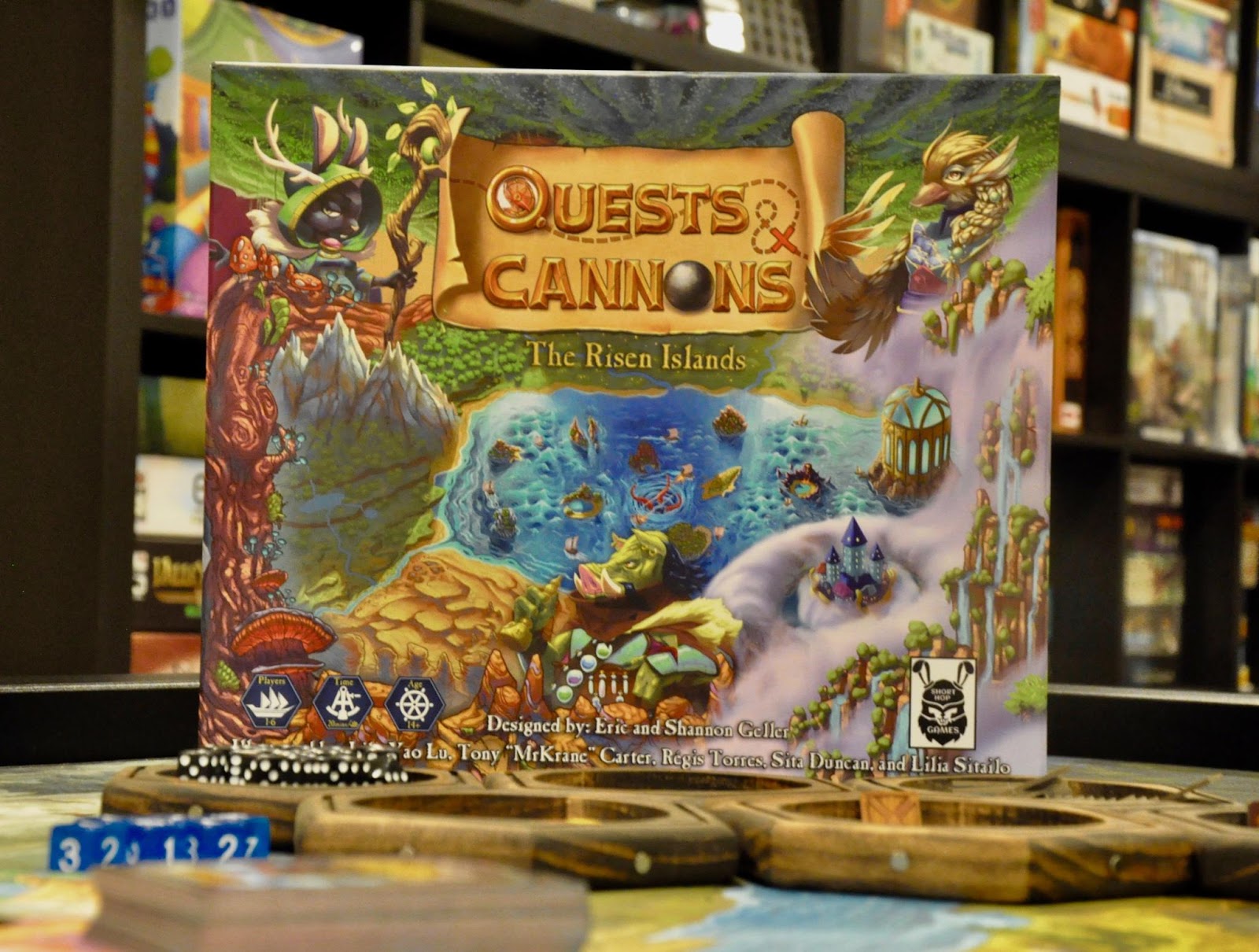 Quest and Cannons: The Risen Island is a game for 1 to 6 players. You can play in teams or in a free-for-all environment. You are playing as a champion from one of the three lands/races. You are braving the seas, in search for answers and resource for you people. But bewareâ€¦ you might encounter other heroes and you might need to attack before you are attack.

Quest and Cannons feels like an open world game, you travel through the seas encountering other players and collecting resources. You can choose to engage in battle with them or simply ignore them. That will determine your experience with Quest and Cannon.

I received a prototype copy, so the art is not 100% finalized but from what we saw, we were extremely impressed. There are 3 starting areas that correlate to the 3 races and their art reflects their stories. There are 3 races â€“ the Porcs, Delven, and the Dwunnies. All the characters are different , the Delven are graceful, the Dwunnies are warriors; lastly, the Porcs are more muscular. Every character is unique down to their facial expressions. There is no â€œgenericâ€ character. All the characters have unique special abilities and share race unique special abilities.   These alone can diversify how you play.

If the final components look anything like what the prototype looked like, this game will have an amazing table presence. The board is modular in the sense that it is made up by tiles. The tiles have different terrains on them, including calm, stormy, and treacherous seas. Some of them even have Kraken. The rules provide set up that you could follow depending on the player count or team set.  However, once you have played the game a few times you will can absolutely set up the board however you want!  This means your board can be absolutely different every single time you play!!!! Imagine the endless adventures you will have! There is quite a few different types of tokens. It can seem a little bit overwhelming at first. Nevertheless once you set up and play, it will be all becomes intuitive. There are tokens for the sails, the resources, the cannons, hit points, and coins.

Players win the game by having the most prosperity once the game end has been triggered. The amount of prosperity, that triggers the end of the game, depends on the amount of players in a team. In the free-for-all set up, the last round is triggered once a player reaches 15 prosperity. In teams of 2 and 3, the prosperity needed is 20 and 30, respectively.

The champions have two special abilities, one is race specific (shared by all champions by and the other one is specific to your champion. Some of the champions are heavy on movement and others on attack. However, they are balanced between the races.

During your turn, you get 3 action points. You can either move, gather, or attack.

You will spend an action point per each movement. Wait waitâ€¦. that isnâ€™t the end of how you can moveâ€¦ there are also sails! You can spend sails to extend the move of one action point. Basically moving even further on the voyage across the sea. Moving in Quest and Cannons is essential. You have to move  to gather resources (canvas, metal, lumber, gems, and spices). You spend an action point to gather and fill your ship of the resources you are currently sharing a space with.  Iâ€™m sure you’re thinking, â€œwhy are these resources important?â€ Well you can use them to complete quest and they reward you with prosperity, coins, and loot cards. You can also sell them at  trading posts. In outposts you can use them to upgrade your ship! Which can be extremely helpful!

If you are sharing a space with another player, you may attack them. This is were the game can become confrontational. You can spend an action point to shoot as many of your cannons as you would like. But you can only shoot each cannon once per turn. Once you have shot your cannons, you roll black dice equal to the number of cannons you have shot. For ever 4 pips on your dice, you deal one damage to your opponent. If you deal at least 1 damage to your opponent, you gain 1 prosperity. If you sink your opponent, meaning you have dealt more damage that lives they have left, you gain 3  prosperity and half the coins they had before being sunken. Attacking can stop a player from completing a final quest that they might need to win. Thatâ€™s how I lost on 2 different occasions.

All of our games felt different. In a higher player count game, we were able to see more loot cards, we ran out of clue cards,  and there were definitely more conflicts.  In lower player count games, we kind of stayed to ourselves until the very end, when I was attacked and this cost me the game!!

You can focus on attacking, which in my opinion seem like it would not yield a lot of prosperity, unless you sink your opponent. But attacking can truly stop someone from winning. In contrast, you can focus on completing quest cards and maps clues for more prosperity. Regardless of how you choose to play Quest and Cannons, you will have a lot of fun.

Quest and Cannons was a HUGE hit at our home. I cannot wait to see the final product. It is coming to Kickstarter in the fall.

In our household we are giving Quest and Cannons: The Risen Islands a 8.5/10.